In the next stage of anticipatory design, products and services will aim to preempt every want and need. In the morning, as you’re getting ready for work, a voice-activated personal assistant will assess your commute, alert you to train delays, and confirm that road traffic is light before calling you an Uber to get you to the office before your early-morning meeting—automatically, without consulting you, knowing it’s doing the right thing. As you approach the office, your go-to café tracks your location, so it can have your coffee waiting as you walk in.

But anticipation will never be perfect, and the smartest algorithms will sometimes be wrong. Why? Because anticipation bases its predictions on routine. The moment life deviates from that norm, the algorithm is put to the test: Adjust in real time, or fail due to lack of contextual understanding.

At Huge, we created a framework so designers can determine if, when, and how an anticipatory service can improve their business. The decision to employ it comes down to two factors: the cost of being wrong and the probability of being right.

The probability of being right.

The first half of the framework is made up of questions approaching anticipatory services from the user’s perspective. What a designer knows about a user will determine the likelihood of being right. 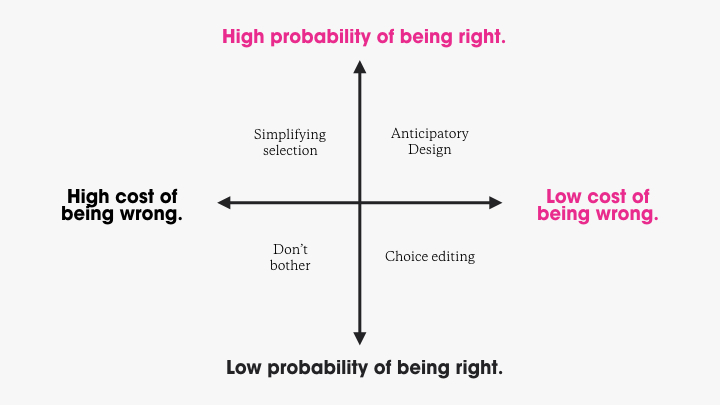 First of all, designers need to understand whether eliminating choices will actually make the user’s lives easier. Uber, for instance, eliminated three choices from ordering a car service: Instead of asking users when they’d want the car, they assumed that users want it now, and from where they are right now, not another location. Two choices immediately were eliminated by anticipating the most common use case. Similarly, they streamlined payment methods and eliminated the hassle around tipping. All these options that were removed were a burden to begin with, which is why people like using Uber so much—it’s a relief from the paradox of choice.

Second, we need to make sure it’s the right user. Consider a mobile phone carrier that wants to send the new iPhone to iPhone users, anticipating they’d want it. The probability of wanting this phone is very high for this group, based on insights about brand loyalty, consuming patterns, and disposable income. It’s a potential win-win for the users and the phone carrier. The same rule, though, absolutely does not apply to Android users, who have an infinite choice of devices and very much appreciate making this choice anew every few years. While the idea of eliminating this choice works for one specific user group, it would harm the brand’s relationship with another.

While we can take into account most things a user does in digital, we have to acknowledge and anticipate huge blind spots: An anticipatory service that would otherwise be accurate (a car arriving at a customer’s workplace at the same time every day) can’t take into account random occurrences (her decision to walk home because she ate too much pizza at work). In cases like these, safety nets are essential, so that both users and brands take a minimal loss if mistakes are made.

Taking this idea further we sometimes might have to to ask: Will attempting to anticipate needs potentially piss off the user? Here, too, we can learn from brands that misstepped. Take Target’s pioneering marketing initiative, which generated coupons based on customers’ past shopping behavior. It worked pretty well until it predicted that a 16-year-old was pregnant and started sending her coupons for baby cribs and maternity clothes. It turned out that a “pregnancy prediction” algorithm announced the news to her parents before she did, much to her father’s dismay. The service definitely pissed off the user and invited skepticism of Target. While our framework can determine how accurate an anticipatory service will be, it also helps designers understand the precautions they will need to take to avoid stepping over the creep line of data privacy.

The cost of being wrong.

If part of your anticipatory service involves sending new products to your users, can they easily return what they don’t want or aren’t ready for? The mobile phone carrier that wants to send the new iPhone to iPhone users needs to insure that customers can easily send the phone back to the carrier if they don’t want it yet. Similar questions should be asked about sending services to users—if a car service sends a driver to pick up the same person after work at the same time every day, can the car be easily “redeployed” if that rider decides to walk home instead?

The danger of being wrong is relative to each business and its customers. For brands in certain industries, anticipatory design is a high-risk proposition. In finance and health, for example, the cost of being wrong is much higher than for, say, the entertainment industry. Users are much more forgiving of bad Netflix autoplay than a health service making assumptions about sensitive medical issues, in which one oversight could potentially harm someone’s well-being. Understanding what your users need and expect from you is key to a business determining what risks to take and how willing, and able, they are to forgive mistakes.

And “danger” can mean something other than the risk to a customer’s health; it can mean the erosion of brand equity and the respect a company has built over time with its users. In 2014, Uber’s surge pricing, triggered by an algorithm taught to hike rates in response to increased demand, kicked in during a hostage crisis in Australia. Uber’s machine was just following its rules—it just didn’t understand the rules had suddenly changed.

The reality is that no matter how great a designer’s approach, she won’t always make the right decision for users. That’s because humans do unexpected things. Plans will change and daily routines will never quite be the same, so for designers, figuring out how to be wrong is just as important as being right.

As the natural evolution of automated and predictive services, anticipatory design has become so normal we’ve come to expect it—we expect services to “know” us and to learn our habits. The framework we’ve created is a starting point to to determine how valuable an anticipatory service could be making people’s lives easier. Because in the end, technology’s true promise is not to demand more of our attention, but to give us more of the thing that’s become most valuable to us, and that’s time.